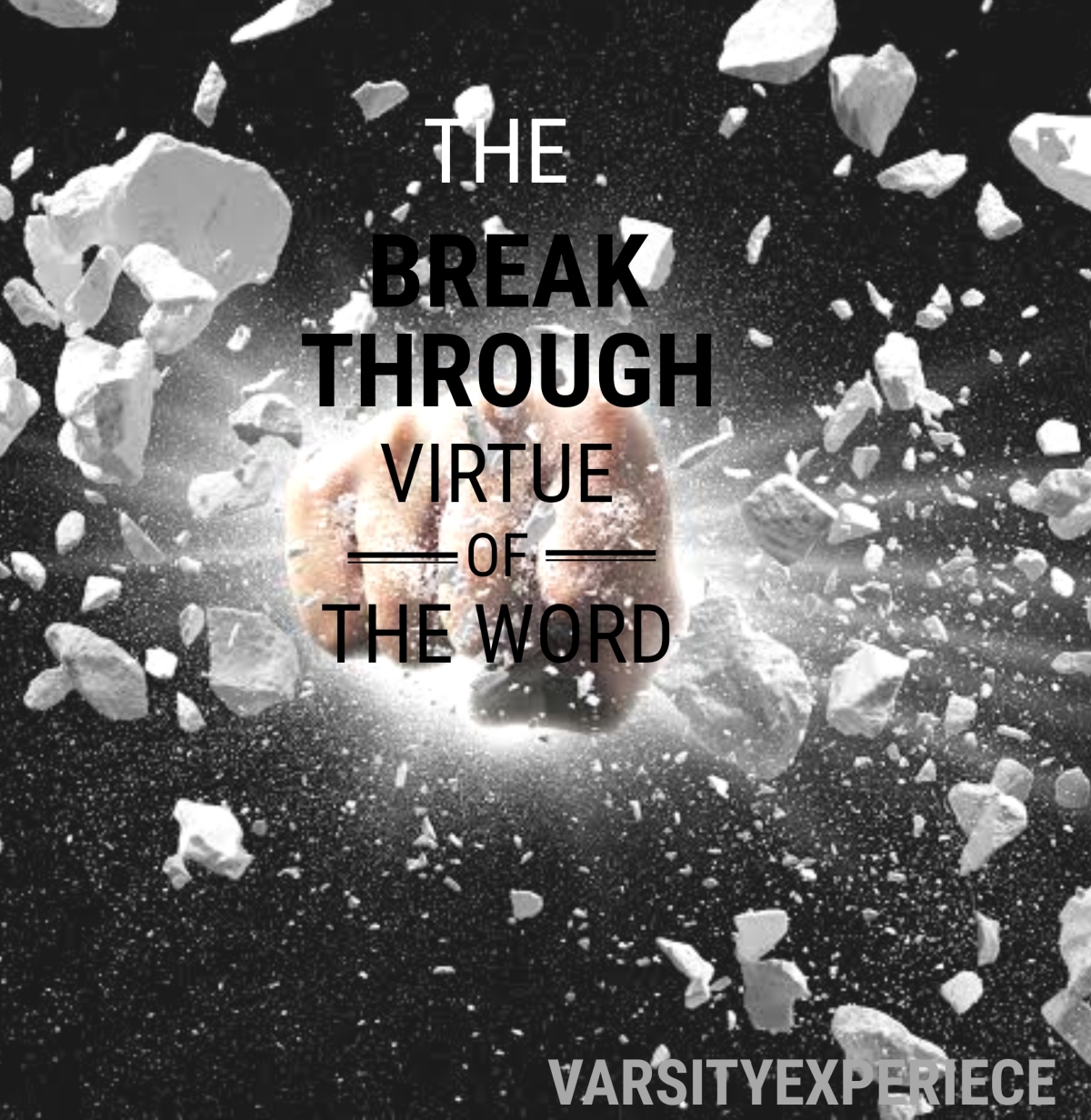 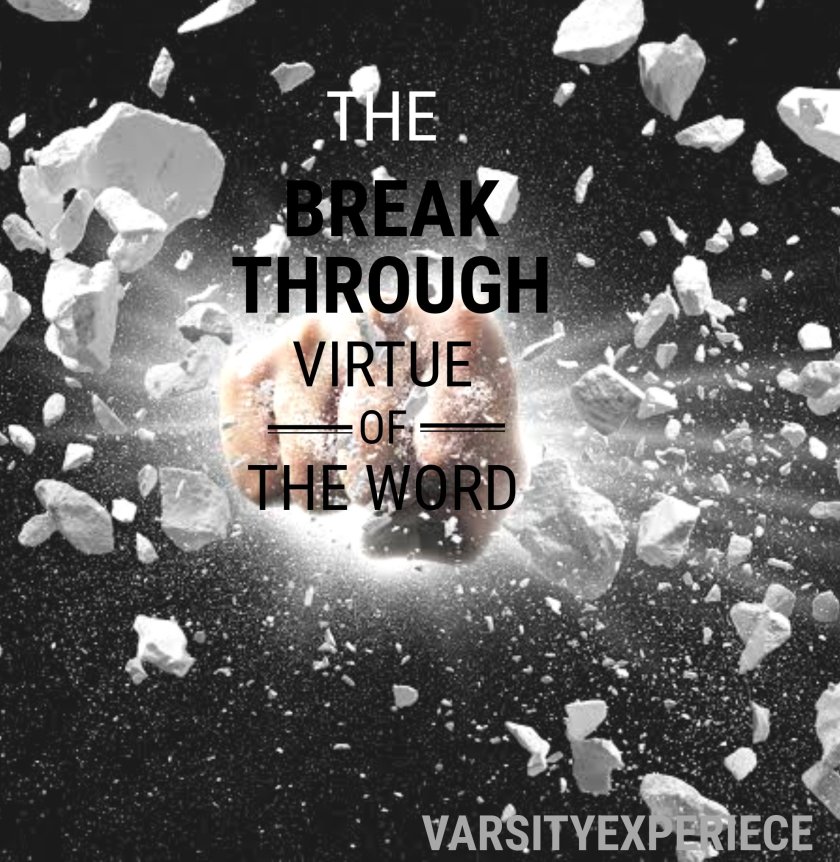 I can only show you what the word says, I can’t believe for you. Everything about life is made by word and all things that are word made are word control. All things were made by him; and without him was not any thing made that was made (Jn.1:3). Every time you receive the word and believe it in your heart, the breakthrough virtue of the word goes forth into your system (The word you receive and believe is what you’re empowered to manifest). 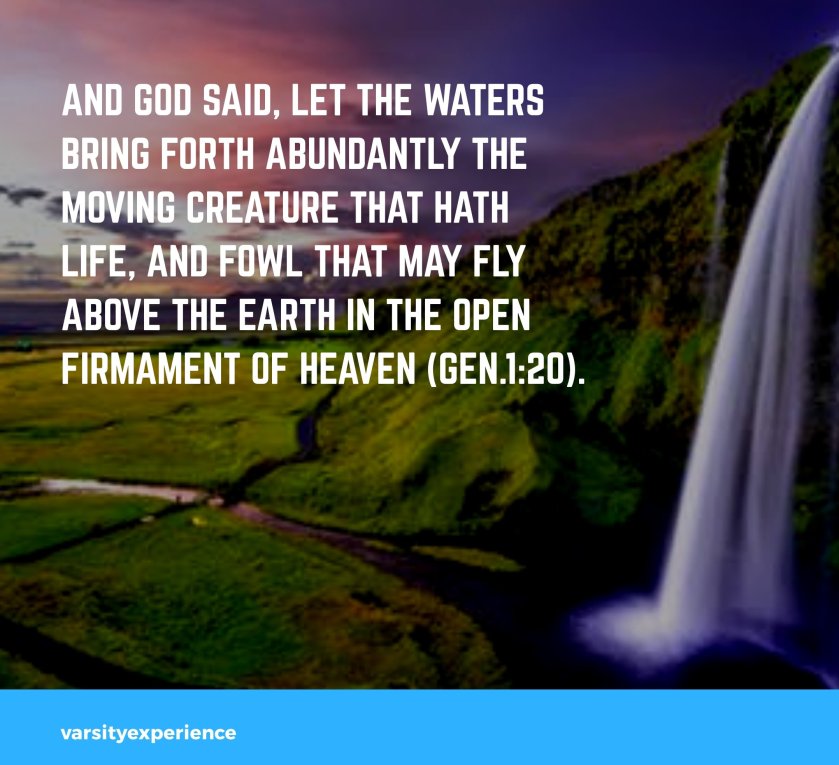 But as many as received him, to them gave he power to become the sons of God, even to them that believe on his name (John 1:12).The breakthrough power in the word is eternal. Every truth of the scripture is valid for all times and become applicable to anyone who is interested. For ever, O Lord, thy word is settled in heaven (Psalm.119:89).

There is a light virtue in the word.

We are in all out battle against the power of darkness (Eph.6:16), but in the word is light, the light that makes us overcome darkness comes from the word. Every revelation of truth enlightens, deeper revelation illuminates.In him was life; and the life was the light of men. [5] And the light shineth in darkness; and the darkness comprehended it not (John.1:4-5).In the midst of darkness, the light in the word empowers us for triumph. It’s not the problem of darkness that we are faced with, it’s the absence of light that is our real problem (Jn.8:32). My people are destroyed for lack of knowledge (Hos.4:6). Craving for light from the word is the wisest way forward (the wisest way upward in your journey). The brighter the light that shines in you, the higher you fly. Who are these that fly as a cloud, and as the doves to their windows? (Is.60:8). Darkness got people stranded but light got you on a flight. They saw not one another, neither rose any from his place for three days: but all the children of Israel had light in their dwellings (Ex.10:23).

There is a fire virtues in the word

There are evil beasts that are raised against us to stop our way forward. The entire world lies in a magnetic field of wickedness. From this negative pole of evil, sickness, disease and all kind of afflictions emanate. We live among wolves in sheep clothing. 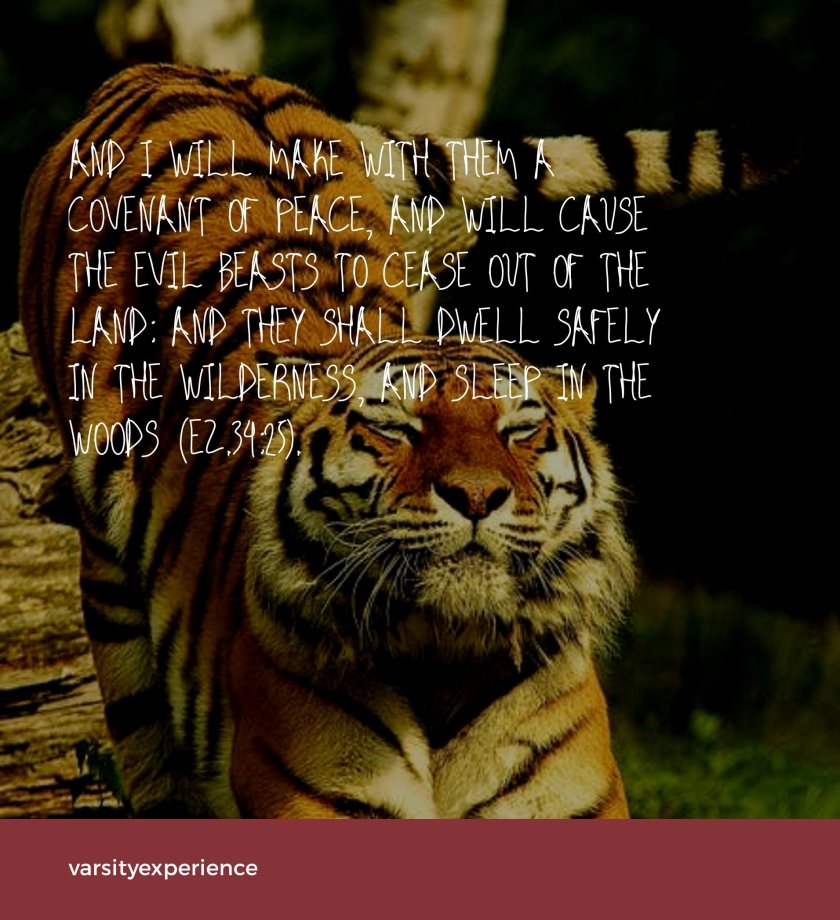 But there is no wild beast that will not surrender to the authority of fire. The word is fired to level out all the serpent and scorpion; all the evil beasts that are raised against our advancement in life and clear them off our paths. Is not my word like as a fire? saith the Lord ; and like a hammer that breaketh the rock in pieces? (Jer.23:29). The fire of the word is one of the breakthrough virtues in the word that silences all the evil beasts that are raised against our lives. These evil beasts include the agents of the devil such as: witches, wizards, and men of occultists.

There is a rock virtue in the word 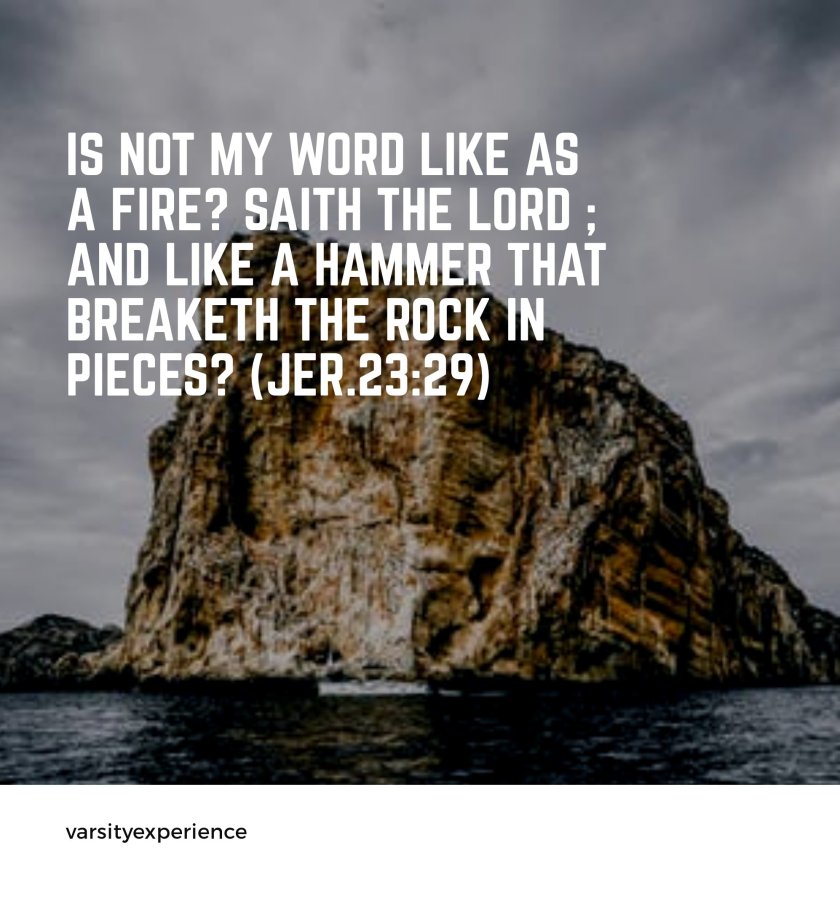 For their rock is not as our Rock, even our enemies themselves being judges (Deu.32:31)And whosoever shall fall on this stone shall be broken: but on whomsoever it shall fall, it will grind him to powder (Mat.21:44)Our “Rock” in capital letter; their “rock” in small letter. That means our rock is bigger than their rock, Jesus is the chief corner stone (Eph.2:20). We are a products of the rock of ages and the rock of offence, the rock that you don’t toy with (1Pet.2:8). Understand your rock status in redemption.

How do i get this done?

Say that it’s written, anyone who dares you will be broken into pieces (1Pet.2:5). Behind most frustration in life are these demonic spirits and we saw Jesus casting out evil spirit with His word (Mat.13:24-28; 1.Cor.16:9) 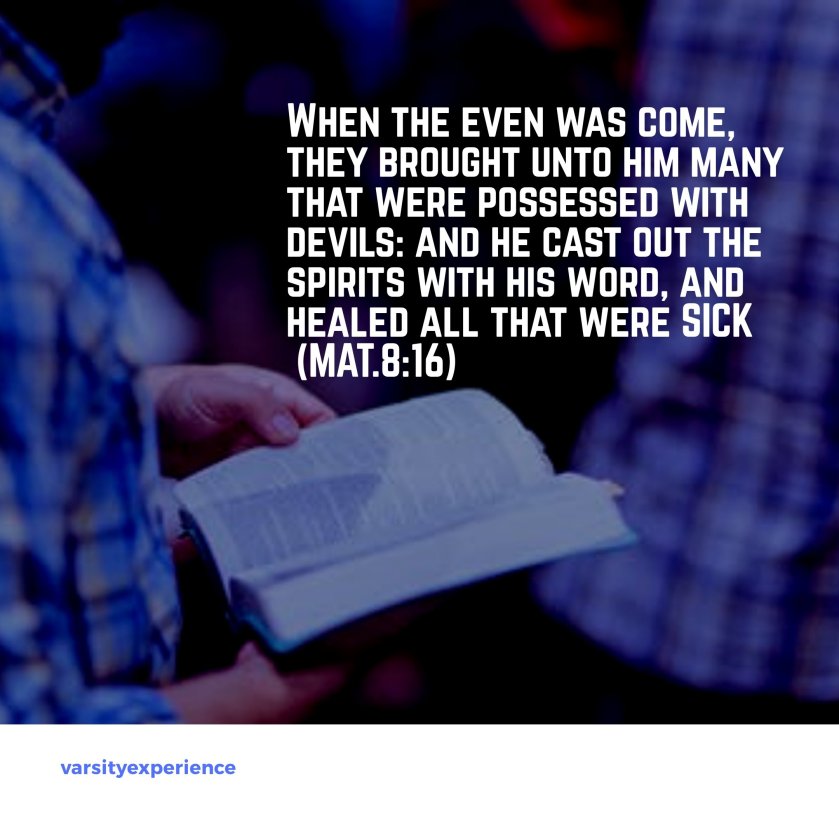 We engaged the word to unleash the breakthrough power embedded in it. God’s word is loaded with authority and power that can deal with any devil (Lk.4:33-36). It’s scriptural to be challenged but it’s unscriptural to be defeated (Psm.34:19-20; 1 Jn.5:4).The word of God is the sword of the spirit. David slang only once before Goliath fell (1Sam.17:49-50) – the fell of Goliath was the rise of David – you engage your tongue in engaging the word in battle. Every word you discover only delivers by faith and faith delivers by the tongue. You can’t be serving God and still be barren or serving sickness at the same time. 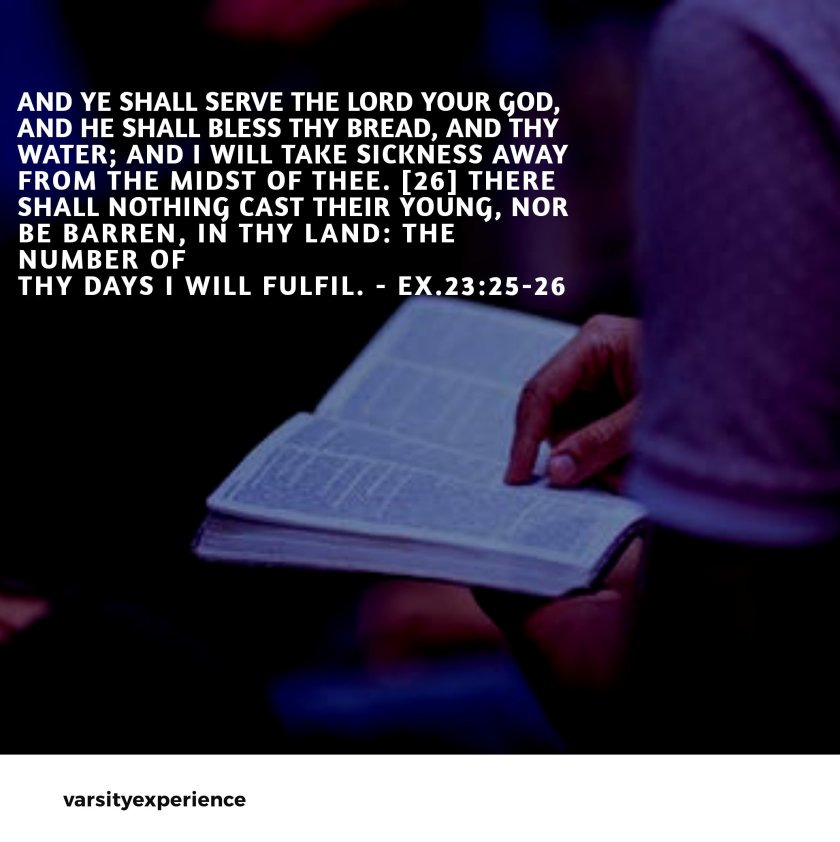 No matter how anointed, a closed mouth equals into a closed destiny (Is.53:7-8). You stand to be molested with a closed mouth (Jesus had to go through that because of our redemption (Acts.3:26) ). You’re too gentle for the victory you’re looking for, you need to engage in the fury of faith (spiritual violence). It’s time to begin to sling the fury of the word based on the issues confronting you (Mat.11:12). To love God is important, but to remain in love is very important. There are people who have served God for some good numbers of years but they are no longer serving Him.

King Solomon as a Case Study

For example, King Solomon: Solomon loved God and sacrificed the largest burnt offerings in history. And God was moved by this, His heartbeat was like ‘I must bless this son today,’ and said, ask me anything (a statement that most of us will be eager to hear).

The unselfish king asked for something that benefits the entire humanity. Wisdom. With wisdom, there was no sound of wars during Solomon time unlike the era of King David, his father. Understand this, it takes only a sacrificial approach to move God. Solomon took a sacrificial step and won the heart of God. He was not only endowed with wisdom, but he was also blessed with riches and honour.

“The king went to Gibeon to offer sacrifices, for that was the most important high place and Solomon offered a thousand burnt offerings on the altar.” (1.Kings.3:4)

I’ve not arrived at where I’m going yet. The bottom line is that, Solomon love God and as a result, he was blessed abundantly. But, after the blessings had come, the strange women and their idols took away his heart from God. The consequence was a fractured kingdom. The wise king also became the foolish king.

“So, the LORD said to Solomon. Since this is your attitude and you have not kept my covenant and my decrees, which I commanded you, I will most certainly tear the kingdom away from you and give it to one of your subordinates.” (1.Kings.11:11)

Wait a minute, Tireless, unbending, and continuous obedience are the master keys to a frequent and constant change of levels. You know what, obedience is the capital proof of love (John.14:21) – your breakthrough stops where your obedience stops.

“But whoso looketh into the perfect law of liberty, and CONTINUETH therein, he being not a forgetful hearer; but a doer of the work, this man shall be blessed in his deed.” (James.1:25) 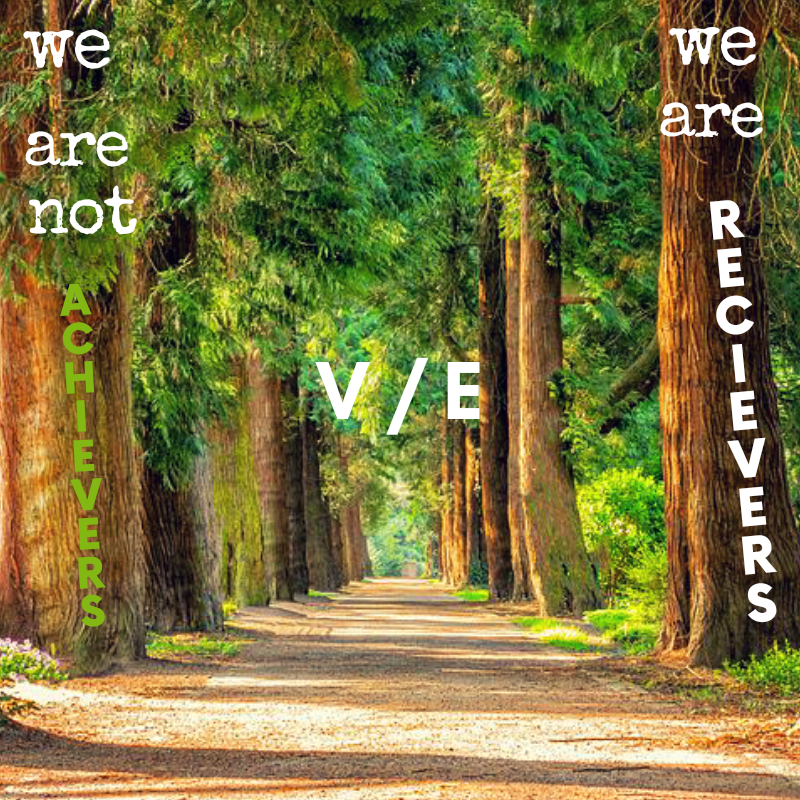 The great statesman, Daniel as a Case Study

Daniel for instance, they sought occasions against him and they could not find any expect concerning his God. They made the king to signed the decree to not serve any god expect the statue image he created.

Kudos to Daniel who could not be daunted by this threat, he kept pressing on and prayed like never before to a point that the king has no choice than to bow and worship him. We all know the rest of the story.

Daniel was decorated and enthroned. They gave him fine linens and ornaments as a mark of honour. Continuity will always set men on a pedestal of honour anyday anytime anywhere. Jesus obeyed to the death on the cross and He was given a name that all things in heaven, on earth and under the earth are subjected to (Phil.2:10-12).

“And when he came to the den, he cried with a lamentable voice unto Daniel: and the king spake and said to Daniel, O Daniel, servant of the living God, is thy God, whom servest CONTINUALLY, able to deliver thee from the Lion?….my God hath sent his angel, and hath shut the lions’ mouths, that they have not hurt me;…So Daniel was taken up out of the den, and no manner of hurt was found upon him, because he believed in his God.” (Daniel.6:20-33)

Continuity is the golden rule. This is very vital. Remain rooted in love both in-season and out-of-season (whether the breakthroughs are coming or they are not). Never serve God on contract but serve in truth and indeed. People believe you only when you’re consistent in what you’re doing.

“Although the fig tree shall not blossom, neither shall fruit be in the vines; the labour of the olive shall fail, and the fields shall yield no meat; the flock shall be cut off from the fold, and there shall be no herd in the stalls: [18] Yet I will rejoice in the Lord , I will joy in the God of my salvation. [19] The Lord God is my strength, and he will make my feet like hinds’ feet , and he will make me to walk upon mine high places. To the chief singer on my stringed instruments. ” (Habakkuk. 3:17-19)